HIGH SCHOOL IS NOT EXEMPT

Washington, DC—As October’s Domestic Violence Awareness Month comes to a close, the Institute for Women’s Policy Research (IWPR) released a new chartbook on the alarming prevalence of violence against teenage girls, finding that one in six high school girls experienced sexual dating violence and one in 10 had been raped. Although one in ten high school girls experience physical dating violence, many states do not recognize high school teens as domestic violence victims, nor do they have consistent legal protections for these teen victims.

“Because young women and girls of color often do better than boys and young men of color on indicators such as high school completion and unemployment, we often take that to mean that they don’t need as much investment in improving their well-being,” said IWPR Senior Research Associate Chandra Childers, Ph.D. “But these findings suggest that young women and girls experience significant disadvantages compared with boys and young men of their same race, particularly regarding dating and sexual violence, and investing in girls of color is just as necessary as investing in boys.” 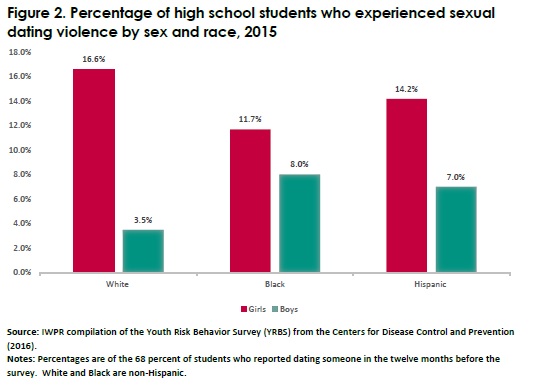 Violence can have long-term effects on girls’ lives, including degraded physical and mental health, limited educational success, increased chances of becoming entangled in the criminal justice system, and reduced long-term economic security. Girls and young women of color have higher poverty rates and lower earnings than boys and young men of their same race, while also experiencing higher suspensions and expulsions from schools and lower college graduation rates than White girls and young women.

The report recommends policies that would allow girls to succeed and live economically secure lives, without relying on punitive interventions that deepen racial divides. In addition to avoiding zero tolerance policies—which have had a disproportionately negative effect on students of color—policymakers, schools, and advocates should support investments in training educators and students on the prevalence and response to violence; educating girls and boys about the harmfulness of emotional, physical, and sexual violence against girls and women; fully complying with Title IX requirements regarding survivor accommodations at school; expanding access to affordable health care; and expanding minors’ access to protections available from the judicial system.

“Universities and policymakers are working to implement structural changes to address sexual assault on college campuses, and this report shows that the problem starts even earlier,” said IWPR President Heidi Hartmann, Ph.D. “There has been an increase in awareness and investment in the futures of boys and young men of color, and deservedly so, but we cannot overlook the investment needed to address the distinct challenges girls and young women of color face.”

The Institute for Women’s Policy Research (IWPR) is a 501(c)(3) tax-exempt organization that conducts rigorous research and disseminates its findings to address the needs of women and their families, promote public dialogue, and strengthen communities and societies.