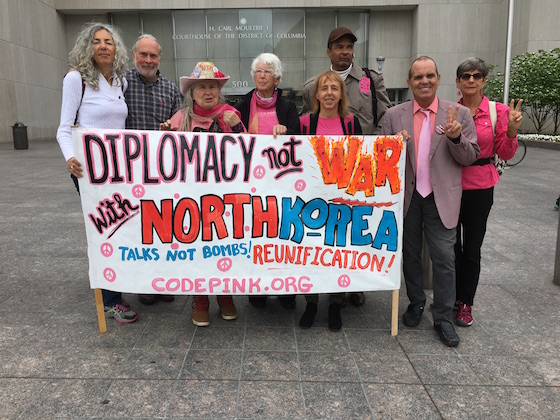 April 26, 2017 Tensions between the Trump administration and the North Korean government have reached a boiling point. In an ominous move, the White House has convened an emergency meeting today, April 26, with 100 Senators where Trump may ramp up the confrontation to new heights.
We are outside the White House right now calling for peace and we need you to immediately call your two Senators! Tell them there’s no military solution to the North Korean Crisis! Demand diplomacy!
We must avoid, at all costs, a direct military confrontation with North Korea. Any military action by the United States, even limited, could instantly kill millions on the Korean peninsula and threaten nuclear and regional war that could draw in Japan, China and Russia.

Every president before Trump considered a pre-emptive strike, but they were quickly sobered by the reality that a military option would trigger a counter-reaction from Pyongyang. Presidents Obama, Bush, and Clinton Administrations could not justify military action that would instantly kill millions of South Koreans and endanger the 28,500 U.S. soldiers and 230,000 U.S. citizens residing there.

On Tuesday, as citizens of North Korea celebrated the 85th anniversary of the founding of the North Korean Army, Pyonyang marked the occasion with a large-scale artillery drill. Around the same time, envoys from South Korea, Japan and the US met in Tokyo to discuss the DPRK’s nuclear program.

The Trump administration has been increasing US military presence in the area and has called for new sanctions against North Korea in hopes it will persuade Kim Jong Un to discontinue nuclear testing. To understand the background, read this handy collection of some of the world’s leading experts:

North Korea in the news again: a time to reflect, edited by Dan Drollette

The North Korea that can say no, Bruce Cumings

From our digital journal, free-access for a limited time

A nuclear South Korea would be a mistake, Jungmin Kang

The real threat from North Korea is the nuclear arsenal built over the last decade, Siegfried Hecker